Shop From Home We will deliver - Here are more details on this Surf Blue Pearlcoat 2008 Chrysler PT Cruiser with Pastel Slate Gray Cloth interior trim at Sandy Sansing Ford Lincoln, Daphne Alabama. Come see the largest inventory on the Gulf coast. We have Over 1300 vehicles to choose from.


With such a huge inventory readily available and competitive financing options, we know you will find what you are looking for! We have Certified Ford Pre-owned vehicles. Customer satisfaction is more than words to us. It is how we run our business before and after the sale! We look forward to earning your business and thank you for the opportunity!

The versatile seat arrangement in the PT Cruiser wagon allows for more rear space than most vehicles its size, and the back seats can either fold forward or be removed completely for expanded cargo space and to accommodate objects up to eight feet long.

The convertible model, with its power-retractable soft top, also bows to those who want a little more practicality in an open-air car. The top is insulated for a quieter interior, there is a small back seat, and the trunk is reasonably roomy.

The PT Cruiser wagon is available in three trim levels--base, Touring, and Limited--though 500 Sunset Boulevard Editions are available with special exterior paint and interior trim. The convertible is only available in base trim.

A 150-horsepower, 2.4L four-cylinder engine is standard on the base and Touring models, while the 180-horsepower, turbocharged 2.4L engine comes standard in the Limited and is optional in the Touring. A five-speed manual is available on the base only, while a four-speed automatic is the transmission of choice in both Touring and Limited models. It is an option on the base.

The 2008 PT Cruiser convertible is outfitted much the same as the base wagon, though it gets power mirrors and driver's seat, air conditioning, 16-inch wheels, and the special cloth seating of the Touring model.

Popular options include a six-speaker Boston Acoustics stereo, UConnect hands-free communication (Limited only), and several interior and exterior chrome accent pieces. The Sunset Boulevard Edition is similar to the base wagon, but adds chromed alloy wheels, tinted glass, floor mats, and special interior and exterior trim features. It is limited to 500 examples. 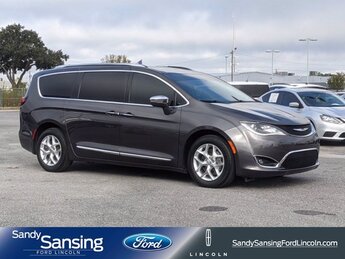