Model Overview
The Colorado is offered in a bewildering number of combinations, to suit uses ranging from industrial and construction to farm use to luxury commuting and occasional boat-towing or off-roading. This includes three cab styles--regular, crew, and extended--and two bed lengths.

With the standard four-cylinder engine, fuel economy is a strong point. Thanks to mechanical improvements this year, the Colorado's highway rating goes up to 25 mpg.

Each of the three engines can be combined with either rear-wheel drive or a part-time four-wheel drive system, which includes electronic "shift-on-the-fly" engagement. A locking rear differential, which may aid traction in some situations, is also optional, and three different axle ratios are available with the V-8 to suit possible uses like hauling or off-roading.

Again to suit this range of potential uses, there are three different suspension setups: the standard Z85, an off-road-tuned Z71, and the sport-tuned ZQ8. The latter includes larger aluminum 18-inch 'Xtreme' wheels and low-profile sport tires, and it rides about an inch lower for improved handling. All four-wheel-drive models get front torsion bars, while rear-wheel drive models have a coil-over-shock arrangement that's better suited for road duty; and all Colorados have twin-piston front disc brakes (rear drum) with anti-lock.

Safety features have been bolstered this year, and GM's Stabilitrak electronic stability control system--which helps prevent the loss of control on slippery roads or in evasive maneuvers--is now standard on all Colorado models. Head-curtain side airbags remain optional.

Crew cab Colorados come with a 60/40-split back bench seat suitable for adults and have the space for up to six adults, while the extended cab comes with two small folding rear seats. 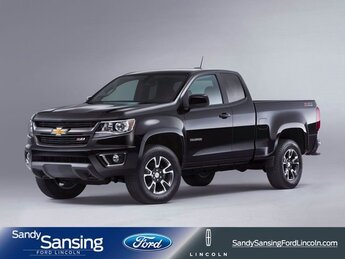