Model Overview
The seventh-generation BMW 3-series hits the road with the rear-wheel-drive 330i and M340i, plus their all-wheel-drive counterparts, the 330i xDrive and M340i xDrive. The body and chassis they share have been usefully tweaked to enhance their aesthetic and athletic appeal. Upgrades include a face more in keeping with the rest of BMW's lineup, better weight distribution, a wider track and a body structure that is significantly lighter and 25 percent stiffer than the one it replaces. The M340i and M340i xDrive also benefit from M Performance chassis tuning and an M Sport rear differential, which only heightens their capabilities.

Power in the 330i models comes from a revised twin-turbocharged 2.0L inline-four that makes 255 hp at 5,000 rpm and 295 lb-ft of torque from as low down in the rev range as 1,550 rpm. This is an extra 7 horses and 37 lb-ft over its predecessor thanks to some fine-tuning of BMW's TwinPower system--the turbos, the direct injection fuel system and the nifty camshaft and valve timing systems Double-VANOS and VALVETRONIC. BMW claims 5.6 seconds in the sprint from 0 to 60 mph with the 2-wheel-drive variant, while the xDrive shaves three-tenths from that figure. The M340i models, meanwhile, come with a twin-turbocharged 3.0L inline-six that produces 382 hp and 369 lb-ft of torque. According to BMW, it will hit 60 mph in just 4.2 seconds. Both engines are mated exclusively to an 8-speed automatic transmission with paddle shifters and manual mode; no manual transmission available.

The Sports Wagon, still part of the sixth-generation 3-series, is distinguished by its elongated roofline and exemplary utility and versatility compared to the other models. Available in 330i xDrive, Sports Wagons feature comparable trims and materials to sedans, yet offer four cargo-floor tie-downs, a storage tray under the floor, a deep stowage compartment and a partition net, all to help keep cargo secure, while the rear seatbacks can be folded down as needed in three separate sections, with a 40/30/40 split. A Top View rearview camera system and a BMW Parking Assistant are there to help with visibility and make parking easier. 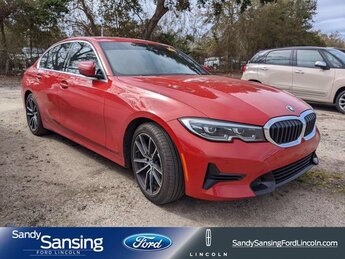