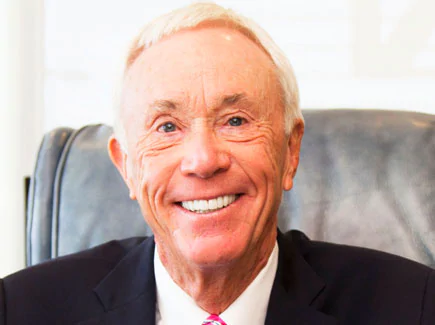 "The most rewarding aspect of my business is seeing a young person succeed."

"The most rewarding aspect of my business is seeing a young person succeed," nominee Sansing said. "I recognize the value of each person, and I know that my success is based on the success of my team. Being able to help them grow their knowledge and income - and teach others - truly makes the fruits of my labor sweeter."

Sansing is 1965 graduate of Pensacola High School in Pensacola. He attended Pensacola Junior College (now known as Pensacola State College) and earned a B.S. in accounting in 1969 from the University of West Florida, also in Pensacola, where he received a golf scholarship and graduated with honors. He also served in the United States Army Reserve from 1969 to 1975.

After taking a job with a "Big 4" accounting firm after college, Sansing moved into sales with the Burroughs Corporation in 1971. "I oversaw a territory but was also responsible for carrying a 29-pound adding machine door-to-door to different companies while trying to sell accounting and business equipment," he remembered. In 1974, he founded Digital Systems of Florida with a friend and worked tirelessly to build the business before selling it to a software company in 1980.

Sansing was looking for a new challenge when in 1986, he bought a Chevrolet dealership in Pensacola. "I was excited and nervous as I had zero experience in the automobile business," he said. "I had a very tough learning curve, but I quickly figured out that to be the best, I had to surround myself with the best people." Sansing acquired more dealerships, and today, owns multiple stores in Florida, Alabama and Mississippi, representing brands BMW, Chevrolet, Ford, Lincoln, Mazda, MINI, Nissan and Toyota. His son and son-in-law both have leadership roles in the auto group, and he has received numerous awards for sales and customer service from the auto companies he represents.

Sansing's roots in Pensacola are deep and he is very involved in civic and community activities in the area, but his philanthropy also extends to the global arena. He is proud of his association with World Help, a Christian humanitarian organization, for which he has been a board member and has made multiple mission trips to China, India, Guatemala and Africa. "On one trip to Rwanda and Uganda, my world was changed when I saw the violence and poverty affecting the people," he said. He worked with World Help to fund a school in Uganda that trains young people in specific vocations and trades that they can use to make money and support their families. "More than 300 students per year who have escaped from rebel slave camps are given a hope and a future," Sansing said. "Returning to the village and seeing the impact on their lives is by far the most important and meaningful award from my business success."

On a local level, Sansing sponsors Communities Caring at Christmas, which delivers Christmas presents to more than 10,000 underprivileged children; Cram the Van, an annual drive that collects school supplies for needy children in Escambia and Santa Rosa counties; and STEM ﴾Science, Technology, Engineering and Math﴿, for which he has donated money to train teachers and buy laptops in the Escambia County school district.

"I give a very large amount of money away annually to various nonprofit organizations," Sansing said. "I know that I have been very blessed and think that it is my responsibility to help others." Other groups he supports with his leadership and resources include the Fellowship for Christian Athletes; Big Oak Ranch (Alabama ranch for children in need); Gulf Coast Kid's House (children's advocacy center in Escambia County); ARC

Gateway (a Pensacola group that provides education and training for individuals with developmental disabilities); and many others. He also provides scholarships for Pensacola State College and the University of West Florida.

For his community involvement, Sansing has been honored with numerous awards. The most meaningful to him is the Ethics in Business Award from the combined Rotary Clubs of Pensacola and the University of West Florida College of Business, which he received in 2011. "Thirteen different Rotary clubs voted and I was selected as the leader that best exhibits ethics in business," he said. "Those that work with me know that I will always choose doing the right thing over a car deal, and I have tried to stress this message to all of my employees."

Sansing was nominated for the TIME Dealer of the Year award by Theodore L. Smith, president of the Florida Automobile Dealers Association. He and his wife, Peggy, have two children and five grandchildren.